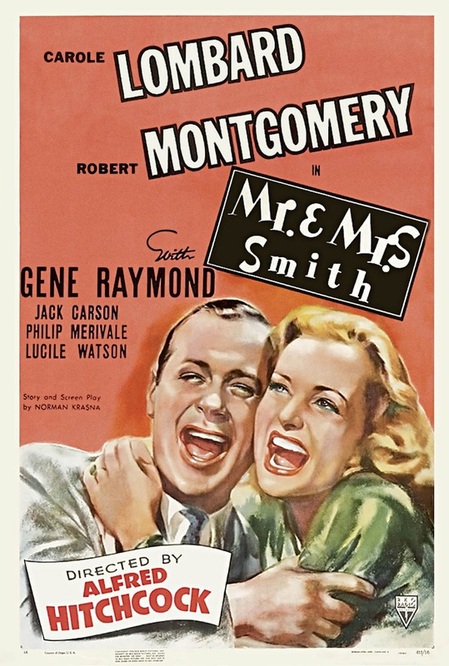 ‘If you had it all to do over again, would you have married me?’

Hindsight’s a wonderful thing, and had David Smith (Robert Montgomery) answered his wife Ann’s (Carole Lombard) seemingly innocuous, hypothetical breakfast-table teaser with a simple ‘yes, dear’, he’d likely have saved himself a lot of trouble and the viewer an hour and a half of their lives.

But in Mr. & Mrs. Smith, Alfred Hitchcock’s one stab at a romantic, screwball comedy, the Smith’s liberal approach to settling their differences is unusual to say the least. Whenever a quarrel breaks out, they resolve to remain in their room – often for several days at a time – until they reconcile. A relationship is nothing without honesty, but unaware that there are occasions when tact is a valuable substitute for truth, David tells Ann that whilst he is happy, he wouldn’t have married again, choosing instead to enjoy the freedom he perceived as being lost in wed-lock. As fate would inconveniently have it, a man named Deever (Charles Halton) visits David at his law office to explain that due to state boundary issues, his wedding to Ann was not legally binding. Ann is less than happy that her other half doesn’t inform her of this, and the same evening declares the relationship is finished. Cue David’s haphazard, goofy quest to win her back.


The breakdown/rebirth of a marriage was not an uncommon template for romantic comedies around the time of the film’s 1941 release. A tricky theme to gauge right, there were nevertheless some, particularly Cary Grant’s foray in The Awful Truth (1937), that were really watchable. Whilst Mr. & Mrs. Smith isn’t a disaster on the scale of some of Hitchcock’s earlier works (most notably Secret Agent (1936), where Peter Lorre seemed to be even more, extra-specially drunk than usual), it lacks the cinematic finery of the director at his best, as in this instance he seems happier to follow genre conventions when outside of his suspense/thriller comfort zone.

Whilst the premise is initially fairly engaging, the characters and scripting aren’t strong enough to make it work. That’s not to say the big performers themselves are terrible; indeed, both Montgomery and Lombard are solid, the trouble is neither of their characters inspire much empathy. Montgomery lacks the easy charm of a Cary Grant (who was apparently first choice for his role), meaning there are times when David comes across as snappy and overbearing when he should seem commanding and confident.

In many respects, the film’s biggest failing lies with its sporadic scripting. Lombard, in her penultimate film before dying in a plane crash, is an attractive and striking screen presence, but is continually hampered by dialogue and actions that make her character repellent at times. Pitched somewhere between a socialite and a mental patient, Ann’s dialogue is superfluous to say the least at times (professing at one stage to liking the smell of snow), whilst emotionally she catapults all over the place, jumping from frosty and spiteful to explosively angry.

Unfortunately, it’s only really the extremes we get to see, and almost never a neutral, ‘normal’ Ann to help the viewer get on side. Her fleeting flickers of care for David seem tacked-on and at odds with her general behaviour – to such a degree that a token happy ending seems almost unmanageable. The rift between characters and the lack of common ground covered between them is something the screenplay never comes to terms with, and as a result, the ending is one of the most farcical you’ll ever seen in a film.

The third player in the love triangle, Jeff (Gene Raymond), assumes the sober, neutral role to offset David and Ann’s antics. He’s another one who’s an odd bundle of contradictions; he’s very straight-laced and plays the ‘I want what’s best for you’ card a lot when dating Ann. However, his sentiment seems trite in view of the fact that he is David’s business partner and so-called friend, and loses sympathy after hastily making a play for Ann directly in front of David which, regardless of the ambiguities of their marital status, seems an intensely dishonourable stunt to pull. On the whole, he’s rather wooden.

No matter how hard she tried to pucker, she just couldn't whistle.
Mr. & Mrs. Smith occasionally flirts with slapstick though its largely uninspired, whilst the film is guilty of adhering to genre set-pieces that are as old as the hills – such as the idea of two couples spying on each other whilst out to dinner, and David showing up at Ann and Jeff’s holiday feigning illness. The music is likewise a bit of a rom-com pastiche, with a flute dominated soundtrack occasionally accompanied by whistling and inevitably coming across as twee and grating on the ears.

Both the composition of shots and the use of mise-en-scène (particularly when the Smiths are dining out early on) are characteristically fine, overlooking one very obvious use of a fake arm when an unconscious David has his jacket removed and a large photo of Ann on his desk that looks more like a posed magazine spread than a family memento. Unusually for Hitchcock though, the shoot itself is of a fairly low quality. Many of the scenes, particularly David’s meeting with Mr. Deever, wander almost completely out of focus at times and the film is beset by nasty blotching effects. Clearly, Hitchcock felt that the blurry-lens look was apt to create a sentimental atmosphere, but the effect is distracting, as it dominates many of the backdrops. Such occurrences, as well as noticeable levels of overexposure in the brighter-lit shots, are untypical of the meticulous director.

There are flashes of fun; David tells Deever that he believes Ann had changed since her younger years, but when the old man recalls that she ‘once chased a dogcatcher half a mile with a baseball bat’, David mirthfully replies ‘well, she hasn’t changed as much as you think’. Whilst trying to make Ann jealous at a restaurant, his silent whisperings to a bemused diner make for a genuinely funny sketch, and Ann’s elaborate charade that attempts to convince David she’s having a good time with Jeff towards the end also raises a smile.

Ultimately though Mr. & Mrs. Smith is undone by a group of characters who just don’t have enough in them to win over the viewer. Norman Krasna’s screenplay slowly entangles itself in clichéd set-pieces and characters whose differences seem on every level either contradictory or irredeemable. It’s watchable, but though the leading lights make for an adept and photogenic starring pair, it’s unlikely you’ll care overly about either of them in the final reckoning.