While it utilises the best clichés such as a disturbing little girl, a young boy hearing voices, prophecies of death, something from the past haunting the future, and mysterious strangers with ambiguous intentions, it sadly never attempts to surpass them. But that does not mean it is as limited as most fright-fests, Proyas endeavoring to meld realism with the fantastic in a way that suggests Epic Movie more than low-budget frightener. Marco Beltrami’s score assists the horror themes, successfully delivering a touch of oncoming menace while simultaneously conveying a sense of grandeur worthy of Ben-Hur (1959). Beethoven’s 7th symphony also adds to the macabre feeling of impending doom, although at times seems comically out of place when coupled with the image of a car, unintentionally making the viewer think they are watching a commercial.

Although it is hardly his best performance, Cage is on form playing his best kind of role, a grieving alcoholic who has lost faith. Skilfully, he manages to portray this character as a loving, nurturing father while letting the audience pick up on an unspoken gulf between himself and his son (which is the death of his wife, Allison, briefly played by Adrienne Pickering). The fact his character seems to have given up on life, with dead-eyes informing friends and family that he has no interest in socialising, capably conveys that he struggles on for the sake of his son, which ties in neatly with his fate at the conclusion. He sustains this temperament even during moments of colossal disaster, giving the impression he is genuinely apathetic but is continuing to help people regardless.

The lack of frustration that he so expertly emits in some of his other roles allows us to describe these humanitarian efforts as, at best, minimal. Despite this the character’s reactions to these events is still wholly believable, his being shocked, yet not surprised, even adding to the film’s belief in determinism, or as he puts it ‘shit just happens’.
Making the heart race, the airplane crash sequence manages to provide spectacle without glorifying it, even appearing justified in its cinematic gruesomeness. It all taking place within a single shot adds to the realism of the situation, the massive use of visual effects craftily not being drawn attention to by the director cutting away. The effects and realism easily rival the best of the disaster genre, however the overriding sense of determinism the film conveys creates a terror that is at a distance, ultimately indifferent about the people involved in the catastrophes.

Without giving too much away, the strange men in black (all inexplicably resembling Spike from Buffy the Vampire Slayer), are never truly a mystery, the audience being a few steps ahead of each twist and development the entire way through the film. However this fails to hamper the enjoyment of it, as the visceral sense of mystery seems to take precedence, permeating every scene regardless of content. It is masterfully maintained at the climax as the strange men’s vessel, while known what to be by the audience at this point, lends itself to both religious and scientific interpretations due to an air of mystery with its ethereal, abstract form. The strange men in black add an unexpected flavour to Knowing, although they rapidly become clichés of a certain type of messiah in modern film. 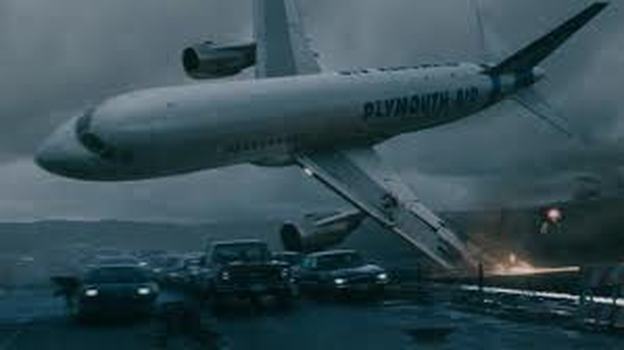 This is why we need fat people to be spread out evenly on airplanes
There is much to criticise about the film, least of all its length, which is about 20 minutes longer than it deserves, probably in an attempt to cater to its desire to reach for Epic status. Most irritating is the increasing passivity of the children as the narrative progresses, their being dragged along without much to say or do simply because their presence is required at the climax. However Proyas has made the best of a film with an unoriginal plot that demands a slow pace, which could have dragged and plodded in less capable hands.

Thanks to cinematographer Simon Duggan it’s a pleasure to look at without damaging any of the film’s attempts at realism. The movie successfully conveys a feeling of determinism, only emphasised by its lack of direct antagonist, while the threat of a solar flare is a welcome, if not entirely drastic, departure from the usual movie meteorites and nuclear war. It all builds up to a satisfying, if predictable, conclusion that refreshingly careers away from the usual Hollywood fodder.
google-site-verification=Y3-8-31UQl356DJGt0gGqGanXuW0x9BrRhDMnAhkqzA