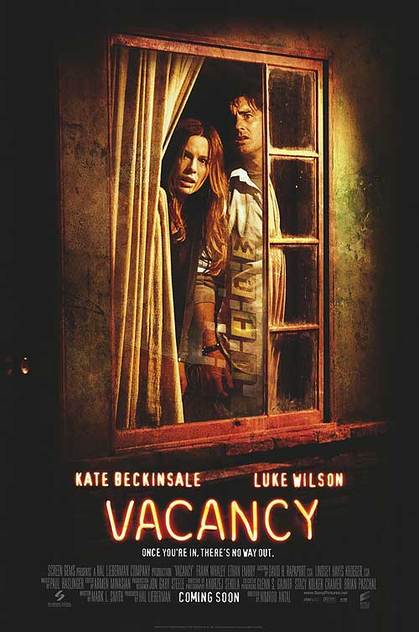 Have the Jehova's Witnesses gone yet?
By Tom Clare

Vacancy must rank among the sleeper hits of 2007. On the surface, it’s another outing for the slightly oversubscribed drive-in/motel horror sub-genre, but with accomplished direction and a couple of new twists, it proves a welcome surprise. The cast put in decent showings, which coupled with intelligent cinematography and impressive set-design makes for a tense and enjoyable horror film.

Things kick off with troubled couple David (Luke Wilson) and Amy Fox (Kate Beckinsale) bickering their way towards an inevitable divorce as they drive through the night in the backwaters of America. David, in attempting to take a shortcut, only succeeds in getting the pair completely lost. When their car picks an inopportune moment to give up the ghost, the troubled couple decide to call it a night, locating a motel off the beaten track.

After meeting the obligatory creepy owner the couple are given a room, and are seemingly the only residents in the whole complex. Sinister things are afoot however, when they happen across some gruesome snuff videos in their apartment, seemingly filmed in the very room in which they’re lodging. The couple discover there are a number of cameras monitoring them from within, and that the masked assailants in the video now appear to be marauding around outside. Thus David and Amy have but a simple goal; to fashion an escape plan, and outwit those who are watching their every move.

Vacancy successfully instils a healthy dose of paranoia and claustrophobia in the viewer and maintains it for much of the running time. The motel rooms are true to form and the dingy lighting and voyeur-like camera shots help sustain a stifling atmosphere that draws attention to the vulnerability of the central protagonists. As with the best horror yarns, unease is as much generated by what is not revealed in the cramped, close-up shots, and fittingly for a film that casts almost everyone as a voyeur at one time or another, the viewer gets to experience the helplessness of not being able to prevent certain occurrences even as you see them unfold. 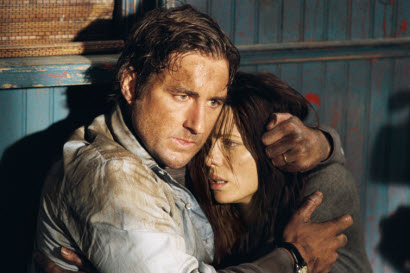 It's okay my love, our volunteering at the kids play centre is over for another day
Early exchanges see David and Amy engaging in some petty sparring, and there’s a definite concern that the lack of empathy, particularly towards Amy who is detached and cold, leads you to wonder if Wilson and Beckinsale are really at home in this sort of setting. Credit where it’s due though, the two use their journey to form a fragile but tangible reconciliation where appropriate (nothing overly soppy or overblown) and show a greater level of development than you would have thought likely from the setting. By the second half not only are the two offering more emotionally-driven performances, you’ll find you care significantly more for the welfare of the pairing than you thought possible during the opening exchanges.

There’s no question, Vacancy plays on horror clichés – mechanics in masks; rat-filled tunnel crawls and frantic phone-calls that, rather than connecting to the police, inevitably end up with the smug villain. Nevertheless, in an hour and a half, you get a simple but cohesive storyline, protagonists who grow as things progress, and a prolonged string of scares that are smartly crafted. The climax, often a major stumbling-block in the genre, deserves mention too, as it’s both tantalising in what it leaves unfinished and riveting in its execution. It’s nothing that will linger long in the memory, but it does everything it sets out to do pretty well. In many ways, a perfect popcorn flick.