10 Batman Gadgets Used To Great Effect In The Movies

​As the self-appointed defender of Gotham City, Bruce Wayne’s alter ego isn’t like other superheroes - he doesn’t have any superpowers. Instead, he relies on his own human ingenuity, tech-savvy friends, and a sizable bank account to create gadgets that empower him for crime fighting.

Over the years modern technology has caught up to Bruce Wayne’s budget, and allowed him to take full advantage of devices with increasing complexity and function.  From his suit to his car, his Batarang and his, ahem, shark spray, Batman’s arsenal prepares him for any conceivable situation.
​
Since his big-screen debut in 1966, Batman’s gadgets have played a vital role in all 11 live-action movies that feature his appearance. From the standard utility belt to the Batmobile, we take a closer look at ten of the Dark Knight’s gadgets that were used to great effect in the movies.
The Batmobile
​From the very beginning, the Batmobile has been a fan favourite gadget. The first film displayed the Batmobile as a practical vehicle but with some fun additional features, such as a Bat-tering ram. The vehicle has gone through some considerable changes over the years, continuing to incorporate more gadgets and features designed to help Batman keep Gotham safe. 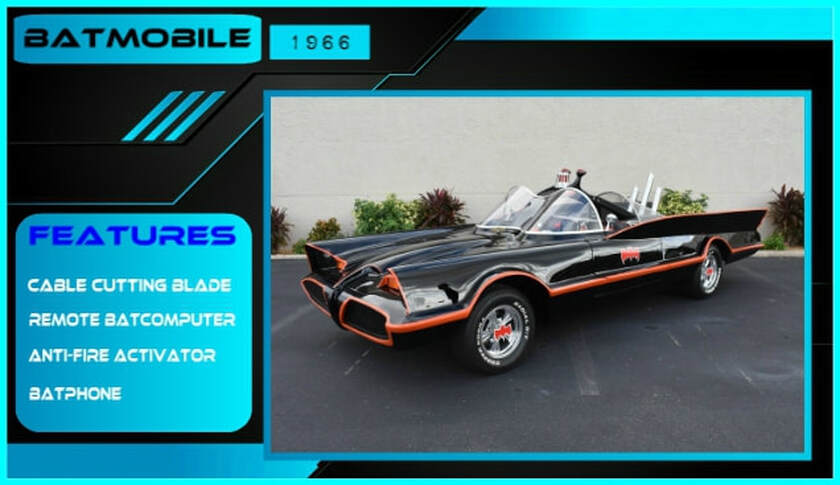 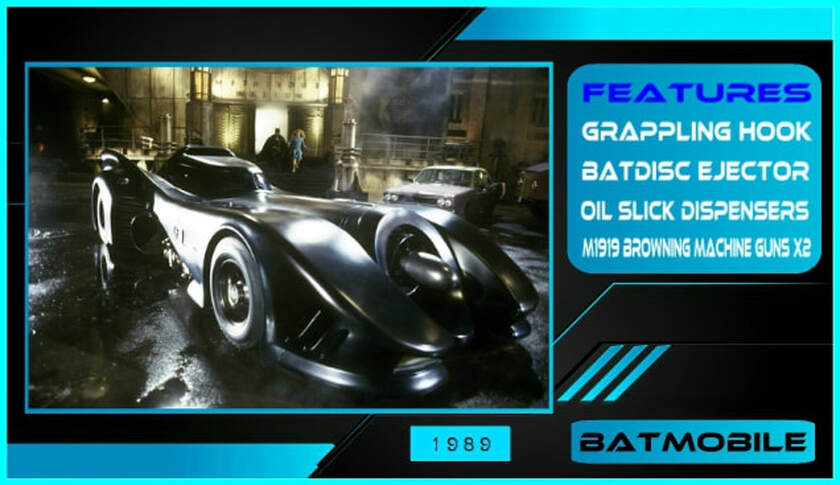 ​The design of the Batmobile in Tim Burton’s films was wonderfully impractical for any real-world vehicle. Outfitted with grappling hook launchers and voice-activated shields, it glided through the streets of Gotham with ease and style. So iconic has this version of the car become that for most people it is likely the one that first springs to mind when the vehicle is mentioned. 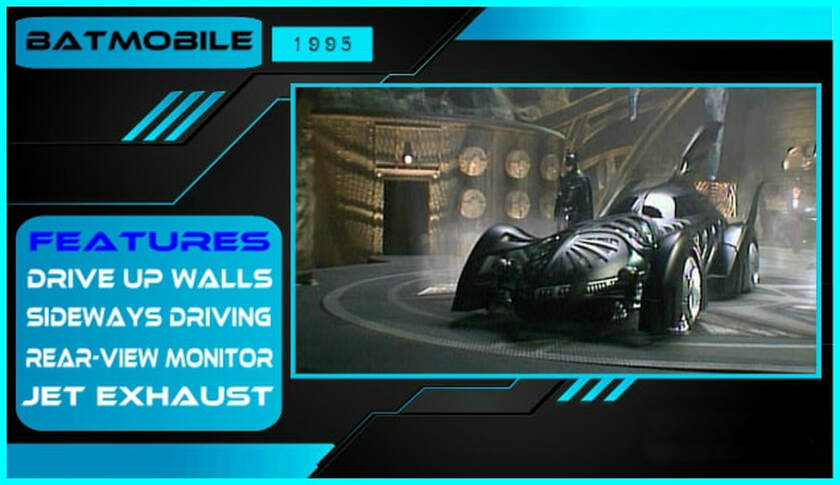 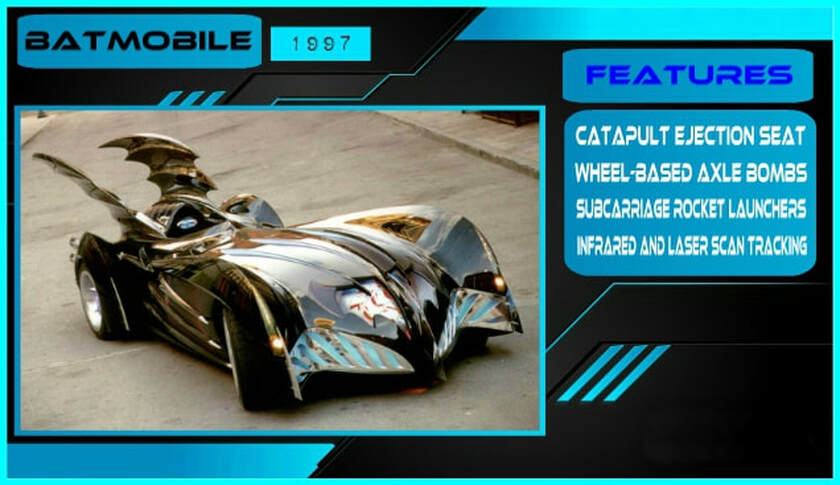 ​Though Burton’s version is a classic, it was not the best use of the Batmobile in the movies. Christopher Nolan’s Batman Begins took this classic Bat-gadget and repurposed it for the 21st century. The only Batmobile to never officially carry the title, The Tumbler has more in common with a tank than a four door hatchback. With considerably more than just a sprinkling of gadgets, The Tumbler effortlessly transports Batman through walls, across rivers and over rooftops. 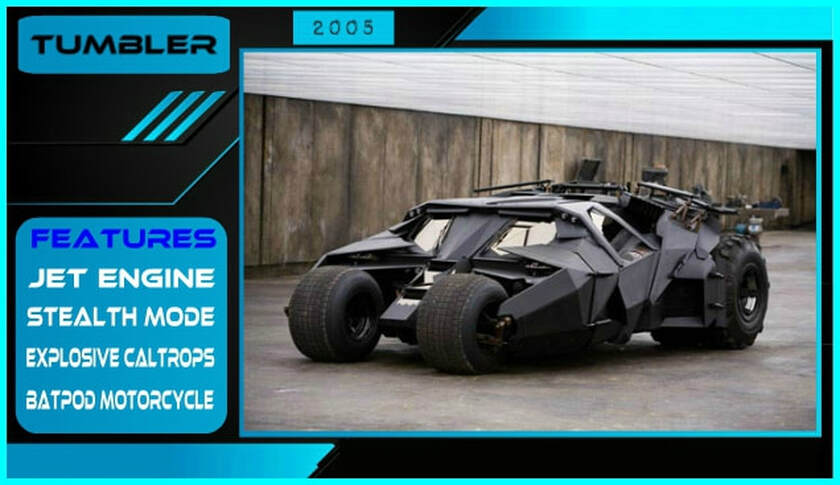 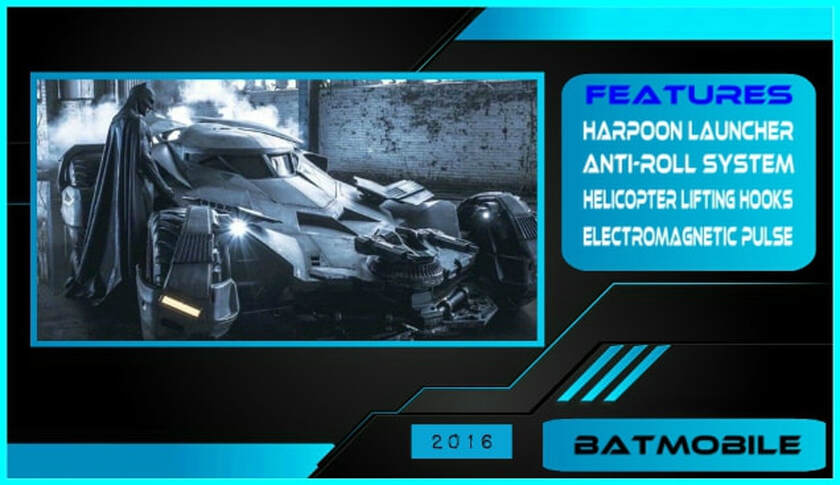 Not only has the Batmobile proven to be one of Batman's most effective instruments, it has also spawned a host of other gadget accessories. The 1989 film introduced an advanced remote control. Voice-activated, the remote is used not only to start the vehicle, but unlike the previous car's voice command system, to drive it from beyond the confines of the car’s interior.
​
In the 1989 film the caped crusader uses the voice activation device to call on the Batmobile the way The Lone Ranger might call on his horse for a quick getaway, which helps him escape a confrontation with The Joker.
Bat-Sonar Lenses
​Since Batman’s big-screen debut in the mid-sixties, modern technology has grown by leaps and bounds, slowly catching up with the brains and budget of Bruce Wayne and all of his technologically inclined friends. As a result, Batman’s gadgets have become increasingly more advanced. 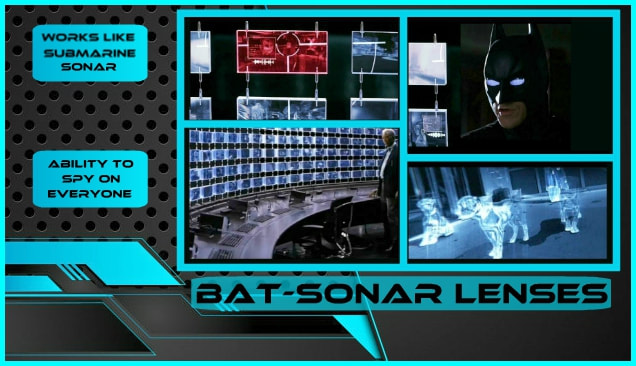 ​​One of the coolest technological developments is that of sonar goggles. Batman has had some sort of tech goggles in one form or another throughout most of the movies, but the Bat-Sonar Lenses proved to be an extremely useful gadget in The Dark Knight (2008), where he used their ability to send a high-frequency pulse to map out a hostile environment. He even applied the technology to the entire city in order to flush out his nemesis.
Batman's Utility Belt
Batman’s utility belt has been a gadget staple from the moment the caped crusader first graced our screens. Holding all the essentials from the trusty grappling hook to the Batarang, the utility belt might just be Batman’s most important bit of kit.
It has undergone significant changes over the years. The mid-sixties depicted the belt practically, with both square and cylinder pockets designed to hold all of the bat-gadgets. As simple a device as it seems, without the belt Batman would find himself missing most of his other amazing tools and weapons.
For the movie Batman Forever (1995) this most basic, utilitarian gadget was turned into yet another important piece of the Batman arsenal. To protect the gadgets and secrets inside, a Taser was added to shock unwelcome handlers. If anyone other than the Dark Knight himself attempted accessing the tools and treasures within the belt, an electrical pulse would swiftly make them regret it.
Batman's Grapple Gun
Another of Batman’s more basic gadgets is the grapple gun. First introduced in Tim Burton’s 1989 Batman film, the presence of the gun finally explained to fans how our hero manages to swing from buildings with such ease.
​
Early comics depicted Batman with a grappling hook, a device attached to the utility belt and thrown towards buildings when needed. He also had a bat-line, a special type of wire attached to a spool that helped him scale buildings. 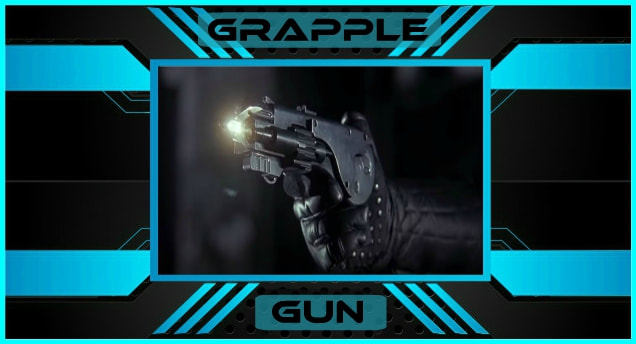 ​The introduction of the grapple gun in Burton’s first Batman movie was not only an effective spin on the previous gadget, but it also made a lasting impact on the comics and became a staple of future films.
The Batsuit
​Batman would be unrecognizable without his trademark costume. Made from Nomex bi-weave or sometimes titanium dipped tri-weave fibre armour, the Batsuit is an impressive gadget in its own right. From the memory cloth cape to the hearing enhancing bat-ears, our hero is virtually nothing without his specialist attire.
​The Christopher Nolan directed Batman Begins (2005) gave a new purpose to some of the popular features of the Batsuit. Perhaps one of the most effective features of it is the serrated fins on the gauntlets.
​Initially more for aesthetics than functionality, the fins were used to defend from attacking blades in previous films, but Batman Begins made much more effective use of them. This movie introduced the idea that the fins could be shot from the suit, and would eventually be used to help give Batman the upper hand against The Joker.
Dark Knight EMP Rifle 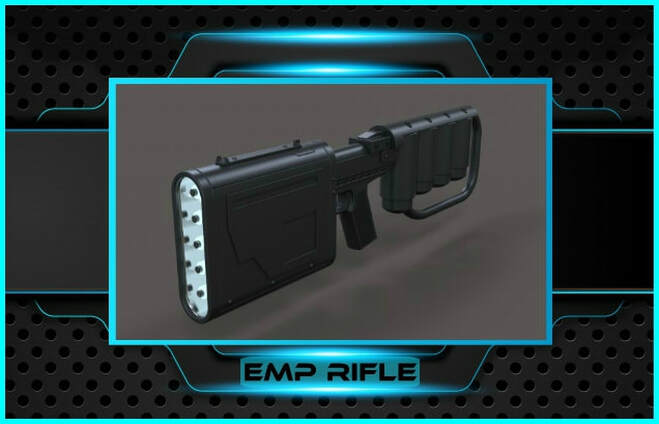 ​Another, perhaps slightly more realistic Bat-gadget is the EMP gun. A small handheld device that can interrupt electric signals using an electromagnetic pulse, Batman utilises it to turn off the lights and disable a criminal’s motorcycle in The Dark Knight Rises (2012), stopping crime in its tracks.
Batman's Kryptonite Spear
​​When discussing Batman’s gadgets, there are some that will undoubtedly come up - the Batmobile, the suit, the utility belt, the grapple gun - but there are others, while perhaps not as popular as the classics, that have proven to be just as essential. 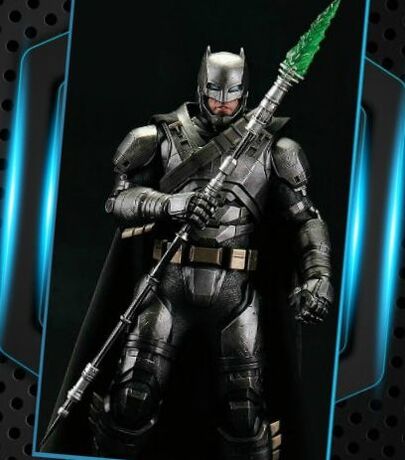 ​​A product of Bruce Wayne’s ingenuity, the Kryptonite Spear, made of meteor rock from Superman’s home planet Krypton (his only known weakness), was so effective it very nearly brought about the end of the man of steel. Had it not been for an intervention from Lois Lane, the gadget that gave Batman the upper hand in a fight against an almost indestructible foe would likely have won him the battle in Batman vs Superman: Dawn of Justice (2016).
The Batarang
​Batman’s Batarang has been around since the hero’s inception. Similar to a boomerang, though rarely seen returning to the Caped Crusader, the Batarang is an understated classic.

While common, the use of this gadget in the movies isn’t always effective. One unfortunate episode is a scene in Batman Returns (1992) when it fails to take down an evil poodle. It did make for a more impressive weapon in some of the other films however.
​
In Batman (1989), we were witness to the Batarang working effectively by ensnaring antagonists’ feet in wire, causing them to trip. 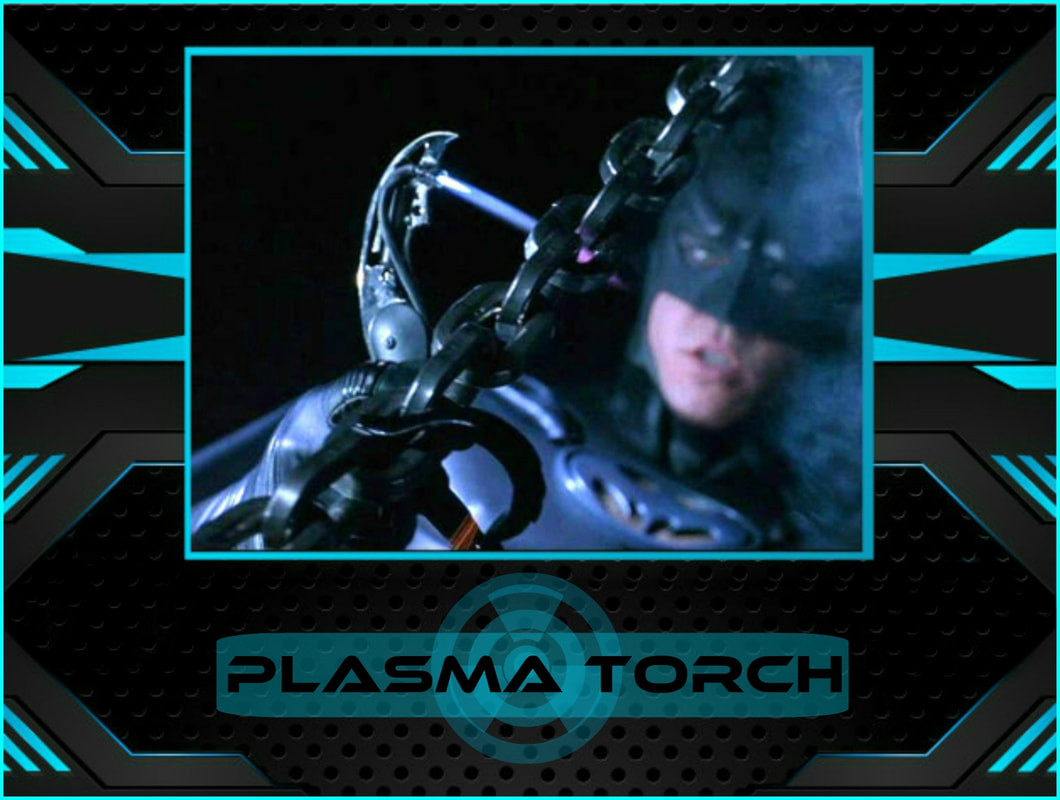 ​​Although the shark spray has yet to be needed again, in Batman Forever (1995) he does make use of an equally rare yet effective tool - a Plasma Torch. In the opening scene, Batman finds the perfect gadget in his utility belt when requiring a device to free hostages held captive by Two-Face. Using the Plasma Torch, Batman is able to blast through a metal chain and set them free.
Delving all the way back to the 1930s, you can discover much more about the history of Batman's Utility Belt on Gabe's Swish and Slash website. Likewise, we recommend you check out his piece about Batman's Batarangs, a throwing weapon with a long and complex development that he has also written about extensively.