Unnerving visions, vivid nightmares and the development of an increasingly sinister doppelganger, whom he refers to as Zachary, are among the primary concerns. Dr. Wells speculates that it’s hard to predict what’s going to happen as he passes the age at which he originally died, (and yes, that section sounds even less convincing on film).

The creepy child trope is hardly a new concept in this neck of the cinematic woods. The Japanese have long since perfected the art in efforts such as Ringu (1998) and Ju-on (2002), and it’s hard to shake the feeling that Godsend is a few years late to the party. All of the aforementioned ‘symptoms’ that Adam suffers from are swiped straight from the demon-child handbook, and are expressed in painfully generic terms. Even so, the distinctly rickety ‘science giving birth to evil’ angle could perhaps have been forgiven if the film had offered up more scares, but in this department it fails miserably. 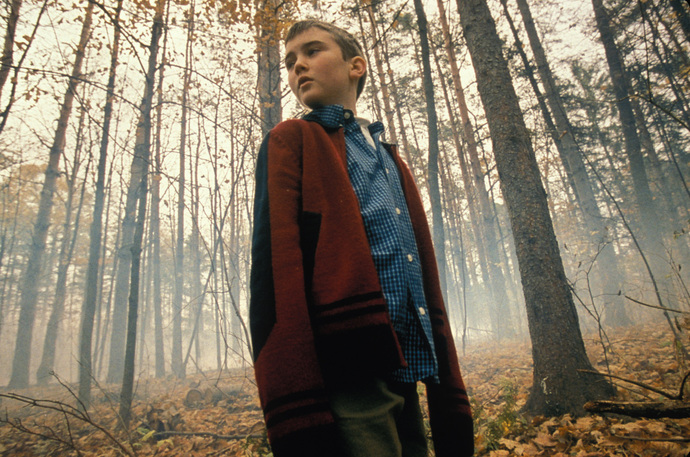 If you go down to the woods today you're sure for a... well reasonably predictable 'surprise'
The child’s ‘evil’ spells lack menace, his parents are mostly able to snap him out of these episodes by calling his name. The occurrence of laughing twin girls, prophetic sketches of burning buildings and an abandoned shack in the woods, are just a few examples of the film’s well-worn clichés, all of which have been tackled with greater aplomb elsewhere. From a technical standpoint there’s little wrong with the film, eerie stabs of music and voyeuristic camera angles ticking the right boxes; it’s just that everything, from the mise-en-scene to the soundtrack, feels utterly derivative, as if trying to follow a set formula as a means of papering over its mediocrity. Both scares and twists are run-of-the-mill and overly predictable. It speaks volumes that the moment that made me jump the most was when someone suddenly raps on a car window.

Whilst the running-time isn’t excessive at a little over an hour and a half, Godsend still feels laboured, especially during the first half. Little effort is made to justify the leap of faith necessary to believing the ‘cloning makes evil’ effects on Adam. Instead, there’s much over-sentimentality on the part of his parents, as Romijn-Stamos and Kinnear go through the motions with what is, for large periods, superfluous dialogue. Even the typically assured competence of De Niro is squandered in the end due to his character (and everyone else’s for that matter) being so uninteresting.

And as such, it’s difficult to engage with anyone in the closing scenes, a frustrating lack of progression that is summed up in an unsatisfying conclusion, which lacks bite and highlights a peculiar disregard for revelations the previous half-hour had brought to light. Tellingly, four other endings were filmed (available as DVD extras), and if they prove anything, it’s that director Nick Hamm gave himself too much to do in the closing stages. Piecing together the not-inconsiderable wreckage of the story, whilst also creating a finale with impetus, ultimately proved unachievable.

To a degree it’s watchable. It has the ingredients of a solid thriller, but sadly the bottom line is that the premise is wayward and the actors don’t sell it. Godsend needs a spark of inspiration, and without it, it struggles even to be just mediocre.