This certainly doesn’t apply to the villains, particularly The Cowboy, who is responsible for some of the film’s funniest moments. Bearing a striking resemblance to Colonel Gaddafi and expertly played by Robert Picardo as an over-the-top foreigner obsessed with emanating an American Old West façade, he briefly steals the show from Short in what is simultaneously the antithesis and a double of Jack’s character (a stoic masculine figure with a high pain threshold that nonetheless is not entirely what he purports to be).

Other villains in the film skilfully manage to be comical yet retain a sense of menace. Corporate boss Victor Scrimshaw (Kevin McCarthy) depicts an air of complete lack of compassion for victims he orders killed, while his Bond-esque villain’s lair of an all-pink fluffy corner, in an otherwise empty building, encourages laughter and questions his sexuality. His partner, Margaret Canker (Fiona Lewis in her final ever film role), delivers a performance motivated more by greed than antipathy, her sexuality comically permeating the screen as she either flirts or is ‘busy’ with men in almost all her scenes. All the dirty work is done by their henchman, the aptly named Mr Igoe (Vernon Wells), a cyborg that parodies The Terminator (1984) in scenes involving an aqueduct and a shopping mall that are oddly predictive of T2 (1992), a film made 5 years later!
INSIDE MAN

The visual effects of Innerspace are among the best of their era, winning Dante his only Academy Award to date. Using jelly to portray the internal workings of a human being at the micro-level is ingenious, and provides a realism that would likely be lost if the film were made today with CGI. Nevertheless, a battle scene between submersibles is limited in scope, happening mostly in close-up, which works to the limited technology’s strengths rather than attempting to subvert it. Other effects, such as the face-change of Jack to look like The Cowboy, appear almost seamless in consideration of the era they were made, and continue to add to the enjoyment of the film.

Jerry Goldsmith’s score is basically a reprise of his music for Star Trek: The Motion Picture (1979), with a hint of his Planet of the Apes (1968) theme in the opening titles. Music in the film is mostly fun, taking the audience by surprise as pop tunes occasionally cross over from diegetic to non-diegetic with the revelation of a radio being present within scenes. Although it features some 1980s Prince-inspired new-wave disco (by Narada Michael Walden) it doesn’t date the film in a cringe-worthy way, sounding as though it were retroactively composed especially for the film as an eighties period piece. Supporting this are a couple of 1950s pop songs such as The Twist, which were enjoying a resurgence of interest at the time the film was made and now add to its musical timelessness. 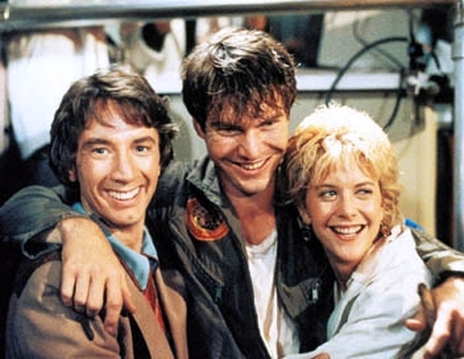 Quaid eventually married one of these. He now wishes he had married the other one
Sadly this does not mean Innerspace is not dated in other ways. While the portrayal of scientists in the film is clichéd almost to the point of unintended parody (in the vein of the absent-minded professor type), it could almost be forgiven if they weren’t all wearing glasses – hideously large 80s glasses that ironically become bit of an eyesore throughout. But this is a small price to pay for an otherwise exceptional film. Jack’s journey of discovering self-belief is well executed, if not a little cheeky at the conclusion, when all three of his failings in life are lined up and dealt with within seconds (rejecting a prospective girlfriend who has no respect for him, sacking his hypochondria-friendly doctor, and telling the boss of his dead-end job that he quits).

Overall the film delivers what you’d expect from the genre, and possibly a little more. It manages the line between comedy and action-adventure without a glitch, never selling-out on tension and pacing to make a funny gag, and never curtailing the humour to appease the plot and pathos. As the audience invest so much care for the characters it seems a waste not to increase the scare factor in action sequences, but is not so much a failing as a disappointing aspect of it being a family film,  something which also lends it much of its charm. As the fates of its chief villains, including The Cowboy, are left unresolved at the climax, you’ll wish for a sequel as Jack speeds off into the sunset to rescue Tuck and Lydia in what promises to be another compelling adventure.