1960s Racial Prejudice and Sexism in Planet of the Apes 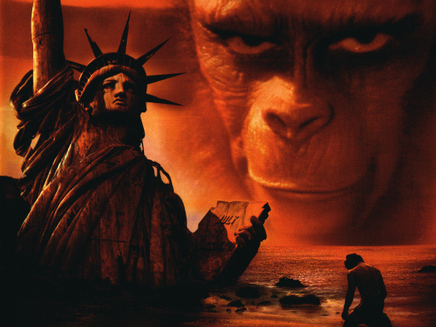 RACIAL PREJUDICE AND SEXISM OF THE 1960s

Science fiction is often used to explore the world from a different perspective, and Planet of the Apes (1968) is a prime example. By examining the world in a role reversal that sees human beings as subservient to apes, the film is able to explore issues as controversial as civil rights, race and war. However, although it is set in a distant future, the film is still a product of its generation and is therefore inherent with a value system and prejudices that were prevalent at the time. This article examines the viewpoint of the film on the issues mentioned above, while also discussing its treatment of other matters, intentional or otherwise. 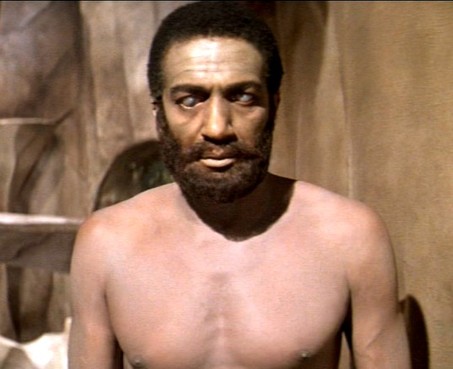 Dodge: Occasionally, we all smoke from the wrong pipe.
Dodge, an African-American, runs through a cornfield and is shot dead. Although the scene is set two thousand years in the future, it could just as easily have been edited into a film about the American civil war (particularly as his attire is different from his companions, more fitting of the 19th century). The style of the carriages drawn by horses, the level of technological advancement of the apes and images of men hanging (ala a lynch mobbing) all suggest this period of history.

However as the spaceship’s crash sequence suggests, this is a world where perspectives have been turned upside down. Despite the cornfield scene, on the Planet of the Apes the current hegemony has been inverted, and a white man is now an ethnic minority. Because Taylor has been shot through the throat, the audience is asked to empathise with those denied a voice. Whenever he tries to reason with his captors he is suppressed by beatings and a hosing down (which was used by riot police to quell civil rights protests). 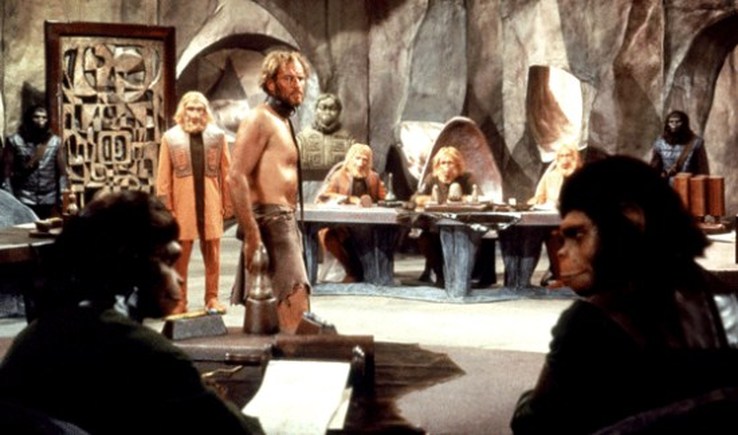 On Trial: Turning up in your S&M outfit never does you any good at a hearing. 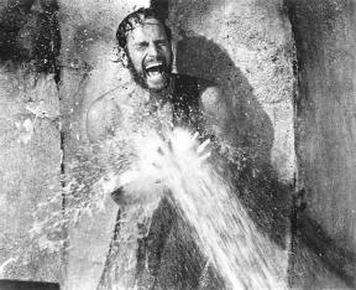 He's not the first man to have that reaction upon meeting Nova.
Even in the formal setting of a hearing he is denied a voice. Filmed in wide shots that separate the tribune from the accused by large rocky supports, the scene emphasises the futility of trying to get their message across. At the hearing he makes a faux-par of thinking he can sit down, which has roots with the Rosa Parks incident, but also highlights Cornelius position as a representative of reasonable-minded America. He is not a racist, but by insisting Taylor remain standing he is an accomplice in the act of discrimination.

The Chimpanzees themselves are identified as second class citizens in the film. Not only does this allow the audience to be more sympathetic of Zira and Cornelius, but it also reminds us of the civil rights issues being raised and highlights that there is also a division of power amongst the liberal and conservative whites in late 60s America.

In contrast to the pro civil rights stance of the film, it can also be viewed, arguably, as a fear of a Negro take-over. One scene in particular refers to humans as ‘Natural born thieves’, a black stereotype. Although this serves as a humorous comment from an ignorant character in the narrative, its presence suggests laughter from viewers at the expense of African-Americans, and would unlikely appear in a film made today. So although the film is well intentioned, it still struggles to escape the very hegemony that it proposes should be changed.
‘SOME ARE MORE EQUAL THAN OTHERS’

Despite the film’s pro-equality argument for ethnic minorities, the sexism of the era is deeply embedded throughout. Nova is often seen as powerless, controlled by Taylor, and conforms to typical science fiction sexist stereotyping. As an attractive mute, fulfilling fantasies of scopophilia, she is unable to express herself very easily, (a child-like attribute, also reinforced by her playing with a doll and Taylor’s father-figure dominance over her). On the rare occasions she does try to express herself (she tries to lead Taylor on an escape route through a jungle) he dismisses her opinion and patronisingly caresses her face, commanding her with a firm, if loving, ‘No!’

In fact it is not clearly established if she even wanted to go with Taylor on his escape, as he insisted she go along and forcefully grabbed her arm. Although this serves as a damsel-in-distress device in terms of the plot, it is also appropriate that it occurs immediately after Dr Zaius has threatened to dissect him. With overtones of castration in the threat of dissection, it seems fitting that Taylor feels the need to reassert his masculinity by dominating a woman. And few would be more easily dominated than Nova. 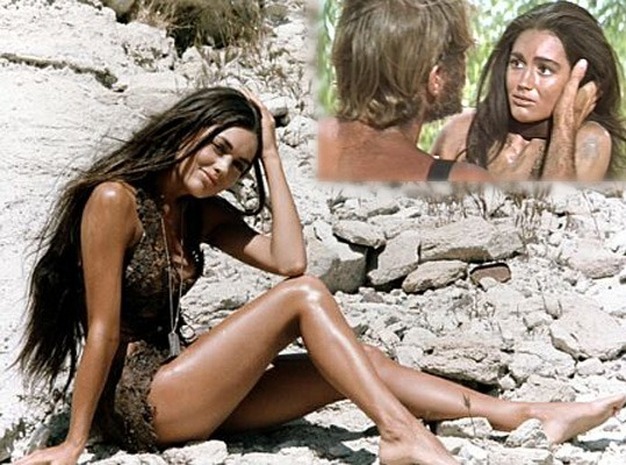 Nova: In addition to that body she's also a mute... The Perfect Woman?
The film does slightly redeem itself with the character of Zira. Strong-willed, intelligent, and considered an equal by her male chimpanzee peers, she serves as a prime example of second wave feminism. This hints that the film-makers may be more socially conscious of the sexism of it’s protagonist than they have led us to believe. However a further probing of the narrative and homo-erotic subtext suggests otherwise.

Perhaps only meant as a joke, Taylor’s response to Dr Zaius comment that ‘I didn’t realise man could be monogamous’ as ‘On this planet it’s easy’ takes on a more sinister tone when we think back to the fourth astronaut, Dr Stewart. In subtext her name suggests that she was to be a servant to the men, and they talk of her as a breeder. ‘She was our most precious cargo’ says Taylor, objectifying her as though she were the ancient doll or the statue of liberty seen later in the film, ‘Stewart was to be our new Eve, with our hot and eager help’. This implies that she was to be intimate with all three male astronauts, who were from an Earth that practiced ‘a lot of love-making but not much love’.

The loss of this sexual situation for the men sets up the entire first act of the movie. After the spaceship sinks into the lake very little is said about mourning her death as a person, but as the men desperately seek out vegetation it becomes evident that they are envious of her female life-creating properties. Upon finding a small weed, all three men simultaneously hold it up together in religious awe, ‘where there is one,’ they say, ‘there will be more’.

When they come across a lagoon rich in vegetation, (life creation in abundance), we see that it does not take long for men, in a world devoid of women, to demonstrate a contentedness to be naked amongst each other. Emerging out of the water (a recurring theme to be found at the beginning and end of the film) a camera angle gives the impression that Landon and Dodge perform an act of oral sex on Taylor, their homosexual bliss only interrupted by the re-emergence of a society (the mute humans). It is only then that the men become desperate to clothe themselves once more.

Planet of the Apes has some strong views on the Vietnam War, which started going wrong for the Americans the year the film was made. Laughing at the long-term futility of planting his miniature American flag by the lakeside, Taylor criticises Landon about his motives for ‘volunteering’ into the astronaut programme as though it were the military. ‘Doing it for the glory’ he says, ‘you couldn’t turn it down without losing your all-American image’.

Taylor’s statement that he is not prepared to die for the immortality afforded to him by a ‘bronze statue’ must have resonated with an audience that faced a £1000 fine and five years imprisonment for damage or loss of a drafting card. Of course the ultimate peril of war is shown at the end of the film, with the revelation of the statue of liberty indicating that an atomic holocaust has occurred.

See no evil, Hear no evil, Speak no evil. 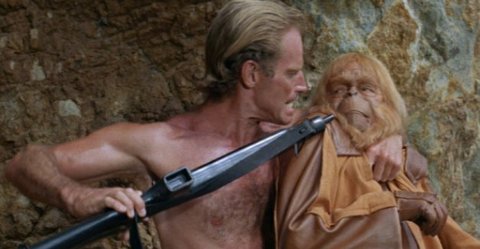 Charlton Heston monkeying around on set. He liked guns. A lot.
But even in matters of war the film has its contradictions, as it glorifies the use of guns. ‘I feel better having one’ says Taylor, and shortly thereafter becomes the only character in the film, post-hunting sequence, to shoot or kill another. The portrayal of a gun as a tool of freedom has strong ties with American pioneering history. However there seems to be a dramatic increase of its glorified use in the films of the 1960s onwards. This may possibly be due to the assassination of President Kennedy, which demonstrated the power a gun could embody to any man determined to take destiny into his own hands. A new American dream.

There is much more to be said about every issue raised in this film, and many more issues to be raised. McCarthyism, religion and the space race to name but a few. Although at times it comes across as a confused and contradictory film, much like the era it was made in, overall its world view seems to be embodied in the final frames.

A decrepit and washed up statue of liberty represents the loss of innocence, values and ideals in America by an unjust war and lack of freedom for all. The danger of nuclear war only makes an eleventh hour appearance in the film. Perhaps the real danger we are warned against at the end is cultural annihilation from apathy and ignorance for one another.
Before You Go...
As discussed, there is so much more to be said about the Planet of the Apes film series than sexism and racial prejudice. Read our next article to get to know them on an even deeper level:

Huge Detailed Exploration On All 9 Planet Of The Apes Movies

​Also Worth Checking Out