The Truth About Viking Funerals At The Movies

VIKING FUNERALS AT THE MOVIES 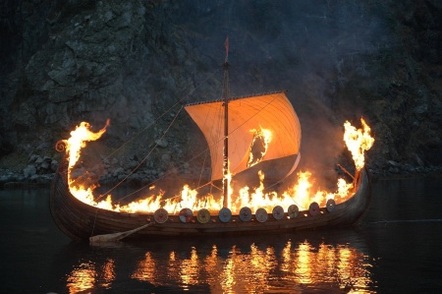 SETTING SAIL ON THE MOVIE MYTHS
By Gail Rubin

Some folks think a Viking funeral would be a great way to send off a loved one. This idealized grand gesture is mainly influenced by films churned out by Hollywood studios. The way the movies portray it, Vikings dispatched their honored dead by laying the body on a boat and setting the vessel on fire with flaming arrows. This isn't how they sent-off their deceased, so where did we first get this notion?
BEAU GESTE: THE FIRST APPEARANCE

Beau Geste (1939) stars Gary Cooper, Ray Milland and Robert Preston as three brothers who run off to join the French Foreign Legion. In a flashback to childhood, the brothers are playing with toy boats on a pond. Beau, the oldest (played by a very young Donald O'Connor), knights his younger brother John and promises him a Viking's funeral. They take one of the toy boats and lay a toy soldier on a box of matches. "Wait a minute! A Viking always has to be buried with a dog at his feet," says Beau. A toy dog is fetched from the study and added to the boat, the matches lit and the boat cast off. They stand at attention with hats removed while brother Digby blows his trumpet in last post salute as the boat sinks in flames. "That's what I want when my time comes," says Beau, creating the myth that Viking funerals take place at sea.

Even 20 years later the apocryphal myth of Viking sea burial is evidenced in The Vikings (1958) starring Kirk Douglas and Tony Curtis as two brawling Viking half-brothers. This grand costume drama ended with the Viking funeral that became idealized in popular culture. "Prepare a funeral for a Viking," Tony Curtis intones after the mano-a-mano fight that leaves Kirk Douglas dead. At sundown, the community assembles by the sea with flaming torches already lit. On a bier constructed of shields and spears, four Vikings in war gear bear his body to a boat at shore. The Vikings lay his body on the deck and leave. The massive striped sail drops into place. An archer dramatically shoots a flaming arrow onto the sail, and the boat is cast adrift. Other archers join in, shooting arrows at the departing boat as the music swells, the sun sets, and the vessel is fully engulfed in flames. An iconic movie image, but a poor facsimile of history. There are many examples of Norse cremation sites and cemeteries throughout Scandinavia. However when a Viking body was cremated in a boat, the vessel was always parked on land, often burned or buried with their personal belongings inside. 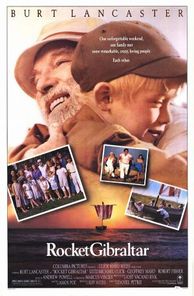 Worthers Original junkies
Rocket Gibraltar (1988) stars Burt Lancaster as the patriarch of a large, dysfunctional family that comes together at his beachside home to celebrate his 70th birthday. His eight grandchildren ask him what he would like as a gift. He tells them 'no ties, no socks', he wants a 'Viking funeral!'. On the beach at night, he describes how the Vikings would send off their honored dead, (just as depicted in the 1958 film). The kids are inspired by Grandpa's vision. They find an abandoned rowboat, named Rocket Gibraltar, rig it up with a striped sail and embellish the bow with driftwood.

On his birthday, the kids find Grandpa has expired from a heart condition while taking a nap. As the big party gets underway, the kids smuggle Grandpa's body out of the house. They hijack the caterer's van to take the body to the beach and give him his Viking funeral. When the parents finally figure out what's up, there's a mad dash to the seashore. They arrive upon the scene to find Grandpa already up in flames. Remarkably, they don't discipline their children for what they have done. They just sit down and watch that sucker burn. 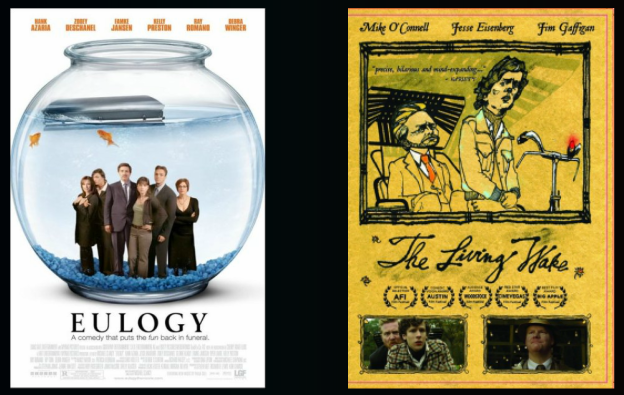 EULOGY AND THE LIVING WAKE: OTHER VISIONS

Eulogy (2004) is a comedy that brings another dysfunctional family together for the funeral of a wayward patriarch. In this ending, the family takes the body in a casket on a rowboat to a pond. Twin brothers drill holes in Grandpa's casket, pour gasoline inside, and shoot arrows at the boat from a distance. In this instance, there's a huge explosion that is most satisfying.

The Living Wake (2007) is a dark comedy that follows the last day in the life of K. Roth Binew (Mike O'Connell), a self-proclaimed artist and genius. After learning of his imminent demise, he's keen to have a Viking funeral for his send-off. He drops by the local funeral parlor to see if one could be arranged. The indignant funeral director tells him to take his business elsewhere. Binew expires on schedule at his living wake final performance. His best friend, Mills Joquin (Jesse Eisenberg), takes the body to a pond, transfers the coffin to a boat, sets it ablaze and gently pushes it away from the dock.

Carpet Kingdom (2008) is a comedy short about living and dying authentically. It starts when Great Uncle Grover (Harry O'Toole) dies unexpectedly and is buried with a traditional funeral. At the visitation, his nephew Owen (Levi Holloway) spies one of Grover's war buddies placing a small pistol in the dead man's jacket. Unbeknownst to Owen, Grover's three war buddies had all pledged to each other that when their time came, they would give each other a Viking funeral. Once he finds this out, Owen finds a way to give his uncle that grand send-off.

Carpet Kingdom: Viking funeral that's completely lost at sea
The veterans and Owen get the casket to the shores of Lake Erie and into the water where it floats in the shallows. One of the veterans, who's on oxygen, asks, "How we gonna set it on fire?" Owen grabs the man's oxygen tank and puts it in the casket with his uncle. He retrieves the pistol, and in a final showdown witnessed by everyone who was at the funeral, he shoots the casket. It blows up in spectacular fashion.

The last line, from the veteran who now has no oxygen, is "I don't want a Viking funeral. I want to be blown to kingdom come!"

THE TRUTH ABOUT VIKING FUNERALS

Despite these Hollywood depictions, Viking funerals and cremations were held on land. The rituals, including burial and cremation, varied throughout the Viking Age of Scandinavian history, approximately 790 A.D. to 1066 A.D. For wealthy or important individuals, a boat, a cart or horses were buried with the body, as a means of transporting their spirit to the Great Beyond.

In some cases there was human sacrifice. A thrall, a woman kept in a drunken stupor, raped by the clan's men and put into the fire with the deceased, was a part of the funeral ritual. Think about that the next time you hear the word "enthralled."

So, whenever you see a movie with a flaming boat on the water, know that this depiction of a Viking funeral is out to sea.

And don't even get me started on the Viking helmets...