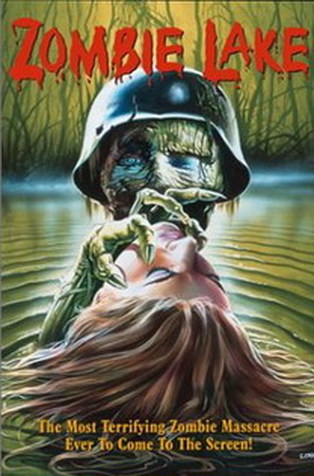 Zombie Lake is a lobotomy masquerading as a film. A zombies ‘n’ Nazis sexploitation/horror of such staggering ineptitude that you could be forgiven for thinking it was the result of a film student’s first encounter with a camera, it’s little wonder Jean Rollin (directing under the pseudonym J.A. Laser) was reluctant to reveal his involvement for some considerable period following the film’s release.

Set in an undefined village in the French countryside, Zombie Lake hands us a flashback scene to set the ball rolling; in this instance, a group of Nazi soldiers being killed during WWII and having their bodies dumped in the town’s lake. Fast-forward a few years and predictably enough, zombified versions of said soldiers periodically start surfacing, chasing (although, at their speed, perhaps ‘following’ is more accurate), and then munching on the townsfolk. Then it’s back to the lake for some much needed zombie r&r, a convenient vehicle for allowing the director to regurgitate footage of them resurfacing, over and over. No matter how tenuous this all sounds, its execution is a million times worse.


B-Movie zombie flicks have enjoyed enduring success because they capture the basic thrill of a hunt, and play to audiences’ fear of gruesome, gory monsters. Unfortunately, Zombie Lake’s make-up is laughable. The Teutonic zombies capture the demeanour of a group of geriatric drunkards suffering from a nasty dose of copper poisoning, whilst their victims lack bite marks or anything to even tempt the viewer into suspending their disbelief.
Numerous instances lead you to wonder whether cinematographer Max Monteillet had forgotten how to use recording equipment at the time of shooting, the most alarming tendency being how the shot drifts distractedly away from the protagonists midway through dialogues, as if sub-consciously acknowledging that the inanity of the conversation was not singularly enough to hold the attention. And when it’s not moving too much, the camera moves too little; gaping pauses punctuate exchanges as actors appear to wait for the shot to pan over to their position, making already-dry dialogues go on forever.

Singling out poor acting performances proves something of a moot point, as to a man, woman and child, everyone is risible, right across the board. Typically, there tend to be two extremes that encompass either complete, monotone disinterest amongst the more ‘serious’ characters (I use the term loosely), or massively over the top and unintentionally hilarious (as well as heavily recycled) zombie lurching shots which reek of weekend fancy-dress. Zombie Lake also has a bizarre penchant for protracted, posy silences, hyper-exaggerated body language and massive abuse of the Kuleshov effect, as it tries and utterly fails to attribute meaning to a catalogue of sterile, gormless-expression close-up shots. Regardless of whether this was out of reverence to the silent era or indeed an attempt at art-house pretentions, it only serves to make the film leaden-paced and boring.
Fittingly, Zombie Lake’s most memorable scene is a completely incongruous one in which a mini-bus containing a women’s volleyball team arrive at the lake and decide it would be a wise idea to strip naked and have a splash around. Dutifully enough of course, their real purpose, beyond a few brief moments of tame titillation, is to become fodder for the greener members of the Third Reich. This scene, dumped unceremoniously in the middle of the picture, is a blatant bit of sexploitation box-ticking on Rollin’s part with not a hint of imagination or subtlety, but given the choice, the giddy ladies are still marginally less ridiculous than the zombies.

The film lurches on towards its yawnsome conclusion with so little care for continuity, editing or storytelling that you’ll be convinced it was a concept film devised by a complete novice. Indeed, it’s quite remarkable to note that Rollin had by this stage of his career accrued more than ten years’ worth of feature-film directing experience. Finding any redeeming features at all, even in isolation, proves difficult, but you could certainly make the case that, whilst utterly unmemorable, ill-fitting and vaguely elevator-esque, the music is perhaps its least atrocious facet.

And when terms like ‘least atrocious’ are used to sum up a film’s relative highlights, you know there’s problems. It’s genuinely hard to see what Rollin was hoping Zombie Lake would be in the final reckoning; it isn’t scary, it isn’t sexy, and it’s impossible to take seriously. The narrative is so patchwork that the whole thing, action scenes included, prove embarrassingly morose, and don’t even fit the bill as a humorous curio. You’ll have watched pantomimes with better make-up and costume design, and witnessed adverts with more depth of story. Put simply, it’s just about as a bad a film as you could ever possibly see.
google-site-verification=Y3-8-31UQl356DJGt0gGqGanXuW0x9BrRhDMnAhkqzA