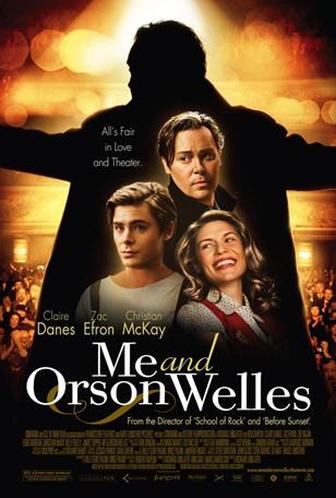 Set in 1937 New York, bright-eyed aspiring teenage actor Richard Samuels (Zac Efron) becomes a protégé to abusive mentor and stage director Orson Welles (Christian McKay) during the Mercury theatre production of what would become a world famous anti-fascist interpretation of Shakespeare’s Julius Caesar. During his time rehearsing the part of Lucius, naive Samuels has a romantic liaison with production assistant Sonja Jones (Claire Danes), a career-ambitious woman in her thirties. This eventually leads to a rift with Welles, who despite being married enjoys a casual sexual relationship with many women in the company, including Miss Jones. Samuels experiences with Welles and Jones eventually ends in disaster, but makes him wiser while also thrusting him into a stronger bond with young playwright Gretta Adler (Zoe Kazan).

Without a doubt the best thing this film has to offer are the performances. Christian McKay captures Welles’ larger than life egomania with subtlety and just the right amount of smarm, yet manages to retain the charm that made the unsavoury character amiable. Disputably in appearance, and unfalteringly in voice, without overly resembling him McKay somehow becomes Welles’ identical twin, providing not only the definitive portrayal of Welles, but possibly the ultimate example for any actor in depicting an historical personality.

The only downside to his performance is that despite consuming a lot of screen time there still isn’t enough of it, making the viewer wish they were watching a dedicated Orson Welles biopic rather than an historical fiction that revolves around the fictitious Samuels’ character.

Although less impressive, Zac Efron manages to carry his own weight, convincingly playing the part of a cock-sure yet naïve teenage boy, particularly during scenes of confusion regarding the casual nature of his sexual relationship with Sonja Jones. Amazingly he manages to do so without making the character irritating or annoyingly over-eager, his drive and innovativeness to succeed in the theatre actually becoming charming assets. Claire Danes’ delivers a good performance too, and despite her ambitious character’s questionable morality and treatment of young lover Samuels, manages to inject some humanity into a part described as ‘ice queen’, although a small criticism would be that this cold aspect of her should have been heightened a bit to increase the anxiety in the relationship sub-plot.
Akin to Samuels, the film romanticises its world, expressing an historic period through the lens of nostalgia. Director Linklater presents us with a world that is secure in its chronological position, characters anchored in an artificial, well-polished time and place that never feels like it will change, even when making cheeky nods to Welles’ future successes. While one reason for it is the lack of a third dimension in characters that have no emotional or psychological interests beyond the narrative, another is the well balanced cinematography by Dick Pope, resulting in a film that often resembles Titanic (1997). Aiding the period setting the 1930s music is unnoticeably good, accompanying events in the film without ever overwhelming the soundtrack or distracting from the on-screen story.
The film moves along very smoothly and naturally, although a couple of one-shot scenes that would normally create a sense of realism only manage to increase awareness of its over-polished state, down to the new and clean look of the movie coupled with performers who appear rigidly confined to their marks. Not necessarily a fault however, it adds to the theatrical theme of the film, which parallels the Julius Caesar play within. Said play is also one of the picture’s highlights, for a small portion of the film it grips interest away from the main narrative in a recreation of Welles original un-filmed play. Sadly it never manages to justify its length however, and eventually becomes a needless distraction from the main narrative, misleading viewer’s memories as to what they are watching.
Embarrassingly, for a film dealing with artistic greatness it lacks any of its own, coming across more as Sunday afternoon matinee at the old people’s home than a classic biopic. But then its historical angle never truly feels more than an excuse to use Welles as a representation of ego in order to explore its deeper concerns regarding insincerity and façade in the world of theatre. Ultimately Me and Orson Welles is a solid film, entertaining and worthy of attention while even delivering some laughs along the way.