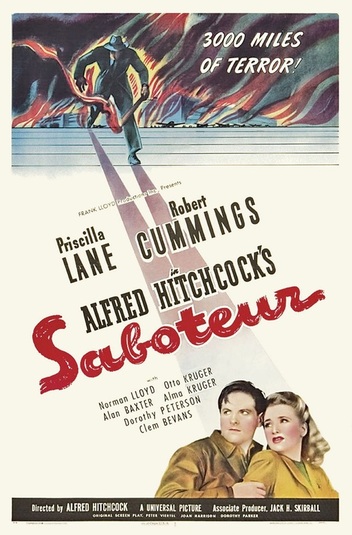 Saboteur: 3000 Miles of Terror... and that's just trying to spell it.
By Tom Clare

Stung by criticism that branded his defection to Hollywood just prior to the outbreak of World War II as unpatriotic, Hitchcock spent the early forties busying himself with a series of films that examined the battle of wits between democracy and fascism, among them 1942s excellent Saboteur.

To describe it with frank simplicity, Saboteur is a bit like a Hollywood reimagining of The 39 Steps (1935), or perhaps a proto-North By Northwest (1959). The premise sees an innocent man accused of murder and perpetrating a crime of sabotage against his nation, as he is forced to go on the run from the authorities. In this instance, the man is Barry Kane (Robert Cummings) and in classic Hitchcock style, the viewer is treated to his desperate attempts to evade arrest, find the real culprits and clear his name in what proves to be a tense, vivacious piece of cinema from the master of suspense.

Cleverer than the majority of its wartime popcorn-flick peers, Saboteur wastes little time in engineering the viewer’s support of its central figure, but the underlying commentary runs far deeper than a simple good versus evil affair.

Though it critiques fascism head-on, it’s notable that Saboteur avoids casting the stereotypical Nazi or Japanese agent as the villain we’ve since become so acclimatised to. The real enemies of the piece are those positioned snugly within the American elites. Hitchcock paints a worryingly tangible scenario whereby such pervasive individuals are untouchable, due to their influence over a press that the public are quick to place their complete confidence in. It’s almost the ultimate enemy-within scenario for a World War II film.

At the heart of it all is Charles Tobin, played with a wonderful, cynical charm by Otto Kruger, who delights in the apparent hopelessness of Kane’s situation. His quiet arrogance and air of superiority comes from a belief that ‘the moron millions’, those easily manipulated by what they see, read and hear, automatically believe in Kane’s guilt. In one of the stand-out scenes of the film, the dangers of a passive society during wartime are brilliantly exposed when the real saboteur, Frank Fry (Norman Lloyd), starts shooting at police in a cinema. The audience don’t notice as they’re too busy laughing at a similar stand-off situation on screen. Their laughter turns to horror as a man is shot in the front-row, and the subsequent anarchy leads to a near-inseparable merging of gun-fire and screaming from both theatre and movie – a case of life imitating art.

Freedom of choice is a theme that permeates the slick, sharp dialogue and in many ways, each scenario develops either on whether people are willing to make judgements, listen to reason or remain passive. Central to this is Pat (Priscilla Lane), Kane’s initially highly-reluctant accomplice. The early scenes in particular make for exciting viewing as Kane tries to convince her of his innocence, confusing her initial sureness as to his guilt. Her image as a billboard model is recurrent throughout the film with similarly conflicted messages stating ‘you’re being followed’ and ‘she’ll never let you down’, suggesting a knowing, dark humour that Hitchcock would polish in his later films.
SOCIETY IN A MICROCOSM

A surreal scene in which Kane and Pat seek refuge in one of the trucks of a travelling circus troop makes for another superbly scripted look at the culture of free-speech. The bickering group of social outcasts come to represent a society-in-a-microcosm, with each member offering their own differing view on justice. It culminates in a vote on whether they should aid Kane or hand him over to the police, making for a masterfully tense sequence. Kane is repeatedly forced to place his fate in the hands of those he doesn’t know, and Hitchcock plays on this paranoia brilliantly.

In one sense Saboteur criticises the ‘moron millions’ for a perceived lack of awareness, yet in one of the many knowing-ironies, the only individual who seems completely sure of the central character’s innocence is a blind man. Kane (and by extension the viewer) can never relax, as his predicament is reinforced through a hammer-beat of cleverly integrated newspaper and radio reports, making for a backdrop of unease that is virtually unrelenting. For the most part it’s unobtrusive, though when Kane warns Pat by pointing none-too-subtly at a book called ‘Escape’, and Tobin produces a the novel called ‘The Death of a Nobody’, things do seem a touch heavy-handed. 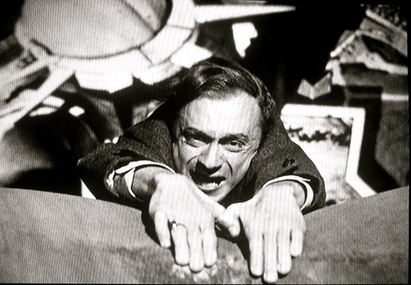 Holding On for a Hero.
Matters are helped by a cast that deliver strong showings across the board. Cummings makes for a likable and enigmatic hero, bringing a suitable level of grit to the role, even if he isn’t gifted in the lighter moments with the easy-going charm of a Cary Grant. It is Priscilla Lane who steals the show however, with a wonderful performance as Pat, Kane’s foil-cum-accomplice. She acts beautifully, with an understated charm that is far superior to Joan Fontaine’s melodramatic antics in Hitchcock’s Suspicion (1941)of the previous year, for which she received an Oscar that some have speculated may have been compensation for not winning a gong for Rebecca (1940).

Saboteur shows Hitchcock’s early mastery of the editing process. In recent times the skill of cutting a film has become greatly diminished, with modern movies often appearing lengthy simply for the sake of it. Saboteur is a reminder that editing is an integral part of making a film flow smoothly. Each scene lasts only as long as it needs to, allowing for a balance of action and plot-progression that is close to perfect. Whilst surprisingly few critics have acknowledged it, the finale on the Statue of Liberty, using a mixture of real-life shots and an elaborate set, remains one of the director’s most accomplished scenes technically, with some extremely clever optical illusions being woven to make the end so effective.

The only small criticism presentation-wise is an excessive use of make-up on certain actors. No doubt it was applied to enhance the look of certain characters on black and white film but some, particularly Cummings, have so much they seem to glow, and this is also possibly the reason he and Lane appear so unflatteringly in the colour posters and photo-shots that have accompanied the film. This small hiccup aside, the film still looks fabulous for its age. Thanks to effective lighting making the contrast appear incredibly dynamic in black and white, the aircraft hangar at the beginning is a work of art. The lavish interior shots of the elite conspirators’ homes make their material wealth luridly evident thanks to some remarkably detailed compositions.

Add to this an ominous, smartly articulated, soundtrack and you’ve got a very complete, very engaging and energetic slice of classic cinema. It’s a text-book example of the cat-and-mouse thriller that remains a lesson in smart editing and dynamic cinematography. With one or two minor exceptions, the acting is top-notch, the story entertaining, and the pacing near-perfect. An overlooked gem, and possibly one of the best films Alfred Hitchcock ever made.
google-site-verification=Y3-8-31UQl356DJGt0gGqGanXuW0x9BrRhDMnAhkqzA